(bdnews24.com)--The planned unilateral construction of Tipaimukh Dam by India will have serious environmental, ecological, social and economic effects on the millions of people of Bangladesh and northeastern India, speakers at a conference at the London School of Economics warned.

The conference, dubbed world forum, of the Voice for Justice World Forum on Sunday in London called upon the governments of Bangladesh and India to enter into a joint feasibility study before construction of any dam for a fair and equitable solution to the impending environmental catastrophe.

It also underlined that as an upper riparian country India has a clear moral and legal obligation to consult Bangladesh before building any such dam.

Convenor of the World Forum of the Voice For Justice, a global human-rights and justice organisation, Dr Hasanat Hussain MBE chaired the conference.

British treasury minister Stephen Timms congratulated the organisers for convening its world forum in London. He told the conference that the British government will always stand by the oppressed all over the world and work with people's organisations such as VFJ to promote human rights and justice for the poor and marginalised.

This was the first world forum of VFJ convened at the London School of Economics by a coalition of its European, US, Canadian and Asian chapters. It was participated, among others, by expatriate Bangladeshi academicians, experts, VFJ members and a wide cross-section of people from the British-Bangladeshi community in the UK.

Concerns were raised at the conference that the possible construction of any such obstruction to common rivers will create humanitarian crisis for millions of people who depend on the rivers Surma and Kushiara.

A paper was also presented at the conference by Dr K M A Malik of University of Cardiff on Climate Change in South Asia with special reference to Bangladesh.

Speakers stressed formal bilateral agreements between Bangladesh and other migrant-sending states with the migrant-receiving states in the Gulf, where serious allegations of violation of human rights and dignity of migrant works have been widespread.

The conference called specially upon the migrant-receiving governments to respect and prioritise the human rights of migrant workers who contribute to their economies and also bring back millions of dollars in remittances for their home countries, and yet receive very little in minimum wages, working conditions, and job security in the host country.

In his paper on women's rights and Sharia, Hasan Mahmud reaffirmed that Islam and the authentic Sharia promote and protect women's right in a most equitable and just manner.

He regretted that the misinterpretation and distortion of these laws over time due to social and cultural biases have led to discriminatory treatment of women in many societies. 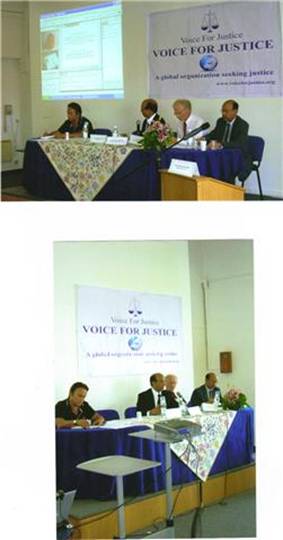 VFJ Conference at the LSE.jpg

Voice For Justice Conference at the London School of Economics